Skala Maskon has developed the VX-8 machine, which can automatically vaccinate up to 20,000 fish per hour. It thus has the potential to significantly reduce the use of medications in aquaculture and to secure a supply of healthy fish for the worlds population. This revolution in fish farming is made possible by the use of a high-performance image processing system in conjunction with dynamic, compact stainless steel linear motors rated at IP69K from LinMot.

From a global perspective, fish is already the most important source of protein for human consumption. According to expert opinions, demand could as much as double within one or two decades. Without aquaculture, this hunger for fish cannot be sated. The negative side effects of industrial aquaculture, such as high levels of pollution from medications, however, have scared off consumers in Europe in particular, causing sales to collapse a few years ago. Aquaculture fish are bred for maximum production and for economic reasons they have significantly less living space than their cousins in the wild. This makes them especially susceptible to illness and parasites. The damage caused by an infestation can quickly threaten the livelihood of the farmer. The epidemic of infectious salmon anemia (ISA) that broke out in 2007, for example, caused salmon production in Chile to plummet from 400,000 t to just 250,000 t within two years. There are many other diseases besides ISA, such as furunculosis, that threaten fish stocks. Many breeders therefore use large amounts of prophylactic medications, especially antibiotics. Growing criticism of these side effects has led to the use of medications being restricted in Europe. 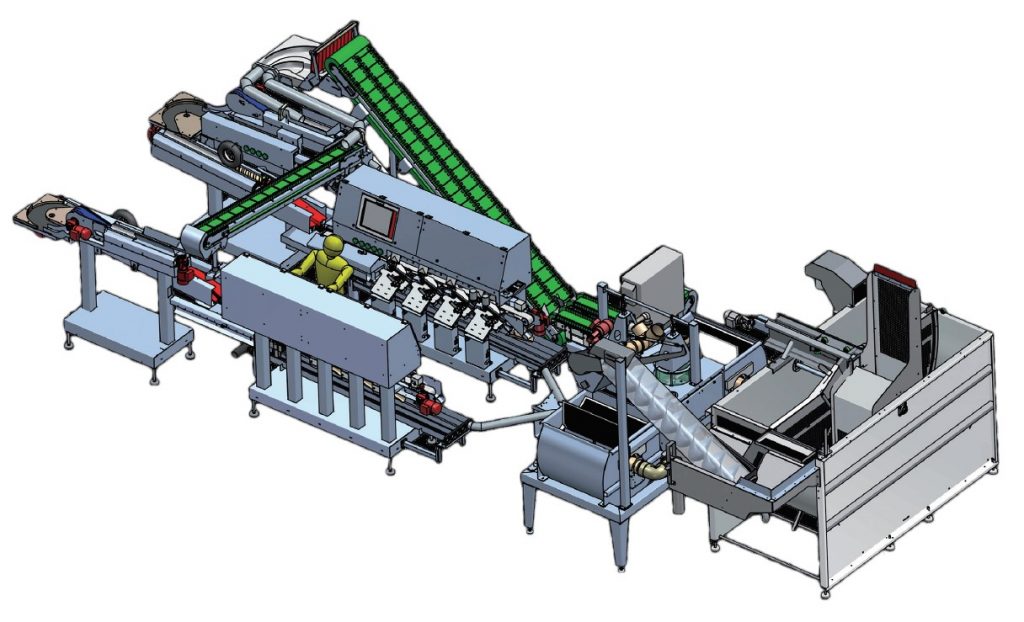 The VX-8 from Maskon, with eight vaccination stations, vaccinates up to 20,000 young fish per hour. (Rendering: Skala)

Vaccinating 20,000 fish per hour aut omatically
Norway in particular has long endeavored to solve to problems of aquaculture. The country, where fish is the third most important export, has recently succeeded in nearly completely eliminating antibiotics. At their peak in 1987, Norwegian fisheries alone used about50 tonnes of antibiotics per year — more than were prescribed for the entire population of Norway in the same time period. Usage in fish farms is now less than 100 kilograms per year. Ninety-eight percent of all salmon farmed in the Scandinavian country have absolutely no exposure to antibiotics. This was made possible by vaccinating the fish. Typically several vaccines are injection at once. Fish are classified as cold-blooded animals, which means that their metabolic rate depends on the temperature, so the injection also contains an agent that heats up the immune system. This procedure is difficult, however, because up to now each fish has had to be manually injected with the vaccine using a syringe. Considering the number of fish raised annually—1.4 million tons of salmon in aquaculture worldwide in 2010—this procedure has reached its limits. The machine builder Maskon has therefore turned to automation of the vaccination process. A system developed by the company, which requires just a single operator, can automatically anesthetize, sort, singulate, and vaccinate up to 20,000 fish per hour, depending on the model. This would previously have required four to six experienced «fish injectors». The machine can not only vaccinate substantially more fish, but also ensures a significantly higher level of quality of vaccination than humans can provide. The core of the system consists of one (VX-4) or two (VX-8) vaccination modules each equipped with four vaccination stations. An image processing system by the Oslo company Tordivel first measures each fish and provides information used to calculate the individual point of injection. The entire vaccination station is then positioned accordingly by a linear motor from LinMot. This makes it possible to hit the optimal injection site for each fish with a precision of over 98%. The length of the fish, as determined by the image processing system, is also used to calculate the depth of the injection for each individual fish. A sensor on the needle then monitors the injection process and the vaccine dosage for each fish. As a result, the mortality rate is less than 0.02 percent.

Compact stainless steel linear motors with class IP69K protection
The requirements for the injection station drives are accordingly high for this application. In particular, they need to comply with the hygiene requirements of the food products industry. The stainless steel motors in the P01-37x120F-HP-SSC series from LinMot optimally meet this requirement. They are made entirely of stainless steel (1.4404/316) and are characterized by their high protection class of IP69K. Gaskets were deliberately eliminated from the motor design. All connections are welded. The motors are also fully potted in order to prevent condensation from forming. Thanks to these features and the closed, easy-to-clean stainless steel surface, the INOX motors are an excellent match for use in machinery and equipment that processes food products or pharmaceutical goods. This was not the only reason, however, that the customer decided to use these stainless steel motors from the Swiss company. Space requirements were also a deciding factor, because the space available in the vaccine modules is tight. The compact form factor of the linear motors, which have no protruding parts or gearboxes (unlike conventional servomotors), was very appealing to the designers at Maskon. The use of pneumatic cylinder was eliminated as an alternative right from the start, because they could not have reached the speed and precision required by the application. An evaluation by Maskon of the linear motors available on the market ultimately determined that only the stainless steel solutions from LinMot could provide the dynamics, precision, and especially the protection class and compact form factor required by the vaccination machine. 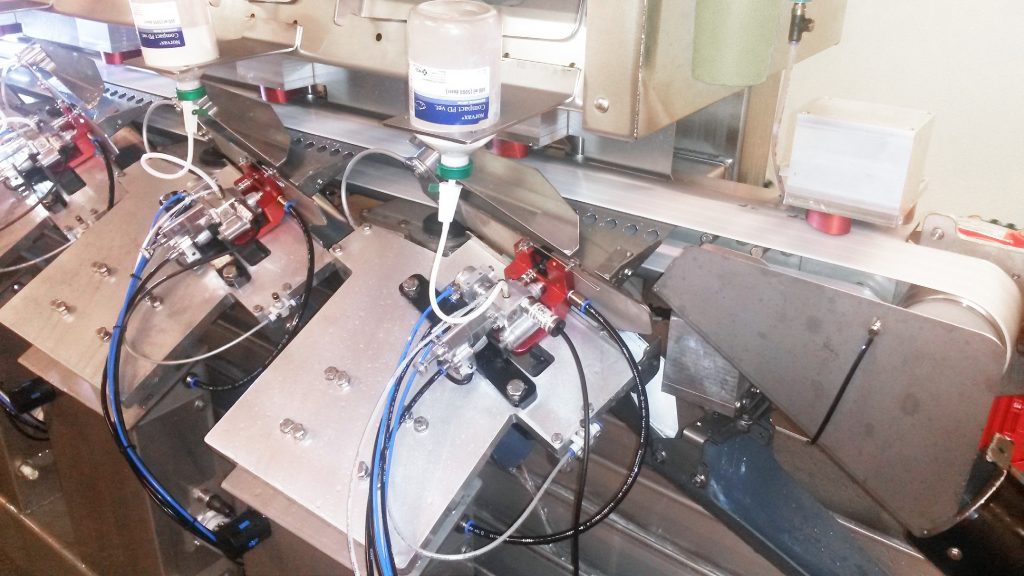 Based on the individually calculated injection depth and site, the LinMot linear motor precisely positions each vaccination station. (Photo: Rossmann)

Extensive product portfolio, including EX variants
This applies as well to the LinMot stator model PS01-37x120F-HP-SSC-R used in the vaccination unit, with an outer diameter of 48 mm and length of 296 mm. When used together with the appropriate slider, it is able to apply a constant force of up to 210 N over the entire range of its stroke. In the standard product line, LinMot sliders are available for strokes from 75 to 680 mm. A high-clearance variant, PL01-19×350/260, with a stroke of 120 mm was selected for the vaccination unit. The motor is controlled by a model B1100-VF-HC servo inverter, also from LinMot, which supports both force control and speed control and is designed for integrating the linear motors into systems with a master axis controller. The force or speed of the motors is thereby set by the master position controller via an analog differential signal of ±10V. Either the internal LinMot measurement system or a high-precision external measurement system can be used for feedback. Simple positioning controls can actuate the E1100-VF controller with stepper motor or directional pulse signals. For testing and commissioning, the VF controller can also be operated in point-to-point mode, with four freely programmable end positions.

More about our INOX linear motors